Our Belief - Every Animal Deserves a Great Life

Meet our animals in the sanctuary in Sonoma County. The kids at When Pigs Fly Ranch are part of a family of animals that would have nowhere else to go. This is their forever home, and they get treated like pets. Our goal is that no matter what their circumstance, they all have an abundance of the love, shelter, food, and happiness that they deserve.

​We're heartbroken to say that Piggy passed away on January 5th, 2022. As the inspiration for When Pigs Fly Ranch, Piggy has a very special place in our hearts, and we really miss her.

​Piggy was captured as a wild piglet in 2008 as a companion for another wild pig that was rescued when he was attacked by coyotes and lost a leg. Piggy was a loyal companion until the tripod pig died, and she was left alone.

Marybeth and Glenn met her randomly on Thanksgiving, 2016, when they were taking a walk along their neighbor’s property. She instantly came over to the fence and wanted to be scratched, and Marybeth fell instantly in love. She had never even touched a pig before and the next few months she visited her every day, bringing her treats, pig kibble, and scratching her through the fence. It became obvious that the two were becoming unlikely friends.

While they knew Piggy was being taken care of, she seemed lonely and was responsive to attention. So they reached out to her owner about giving her a new forever home. They said yes, Piggy got new digs, and When Pigs Fly Ranch was born.

She was a diva at heart. She was mellow but wanted lots of attention, especially when she was in the mood for a belly rub. She indulged in long naps in the sun and couldn’t get enough of the wallow when it was hot.

​Pigs typically live about 10-15 years. We knew when Piggy started to slow down, at age 13, that she was nearing the end of her life. She died peacefully, with her human family surrounding her. She is now buried at the sanctuary surrounded by her other pig sisters and brothers.

Thank you, Piggy, for your amazing spirit, and for teaching us about the beauty of pigs.

Donate in Memory of Piggy 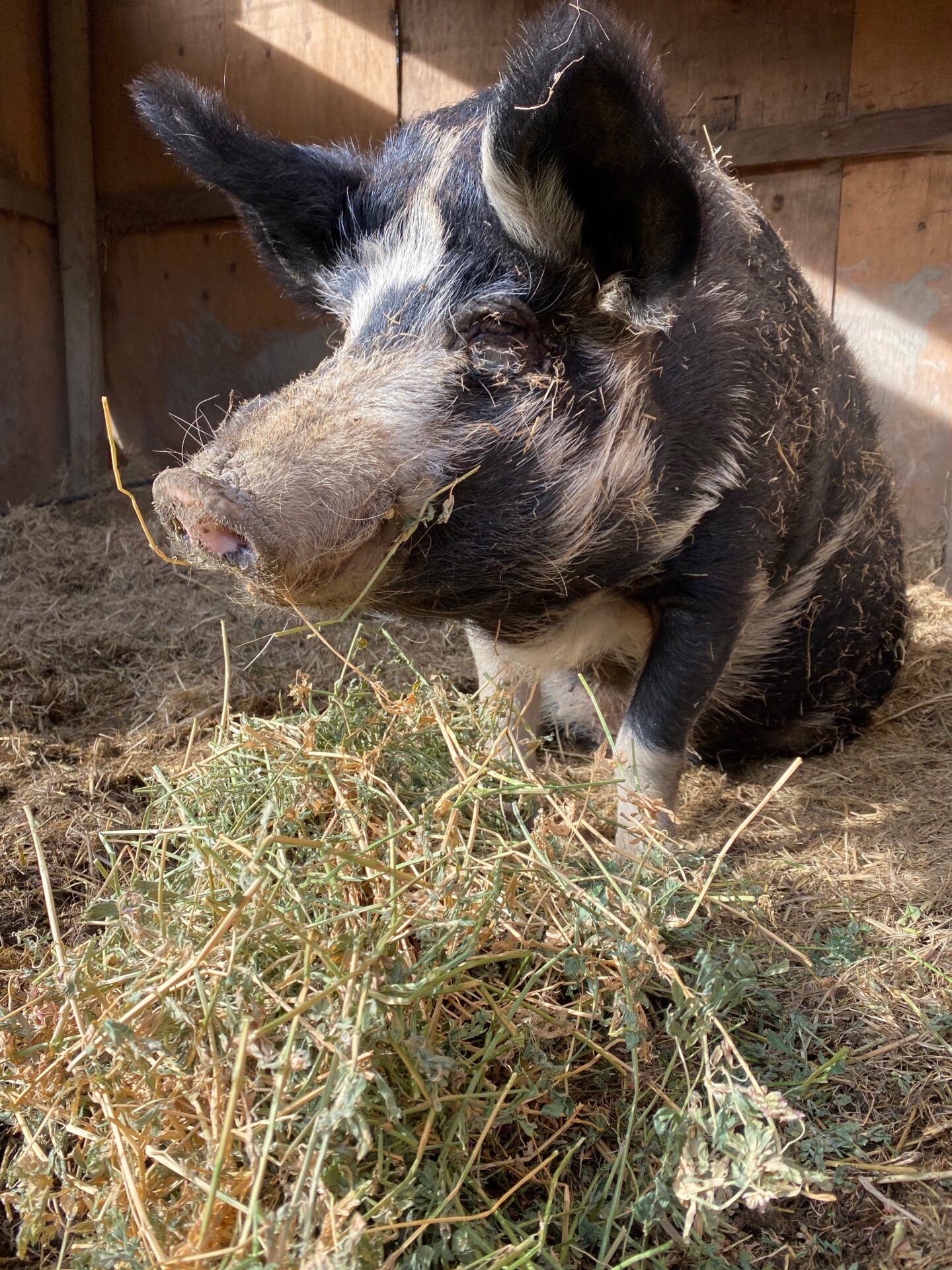 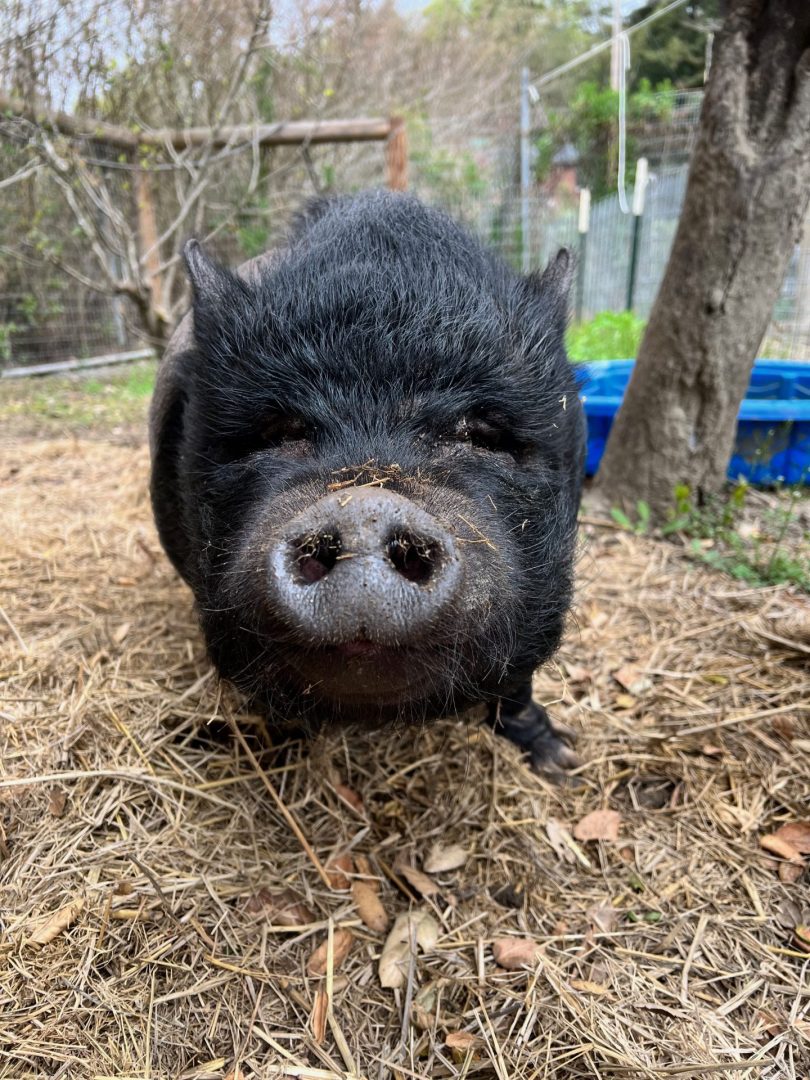 Little Piggy (originally named Piggy Smalls), came to us from a great family right here in Guerneville, who found themselves unable to keep her. At 9 years young, she is a wonderful girl who loves to roll over for belly rubs as soon as you start scratching her ears! We're so happy to welcome her to the When Pigs Fly Ranch family!!

Fellow animal rescuer and now our Board President, Deirdre, called me one day in 2017 and said she was doing a rescue dog transfer in Fresno, CA, and Animal Care and Control there had picked up a young potbelly pig. The dog rescue group didn't know what to do, but Deirdre to the rescue! Within a minute, I said we would take the pig, and that's how she got her name. She was about four months old when she came to us and such a cutie! She weighed about 40 pounds then, and now she's a big, grown girl. One of her funniest traits is how she screams when it's feeding time – what a noise! She is playful, sweet, and loving, her favorite foods are tomatoes and apples, and she loves chasing her buddy Hamilton around.

Fresno’s story took a really rough turn in December of 2018 when she contracted pneumonia with a very high fever. As a result of the fever, she developed a terrible and rare skin ailment which our vet called “fever strike”, which caused her skin to literally burn off her body. We went through a rough few months together, with me having to remove the dead skin and treat her wounds, which were like 3rd-degree burns over her entire back – snout to tail. To say it made us closer is an understatement. I’ve never had to do something like that to an animal, so it took all the courage I could muster. But seeing how she stuck it out and truly appreciated all the love and care I gave her made my heart so happy, and our bond so strong. She eventually grew back a thin layer of new skin, which still requires daily treatment, but she lives a very happy life, still running around and spooning with her pen mate Hamilton. 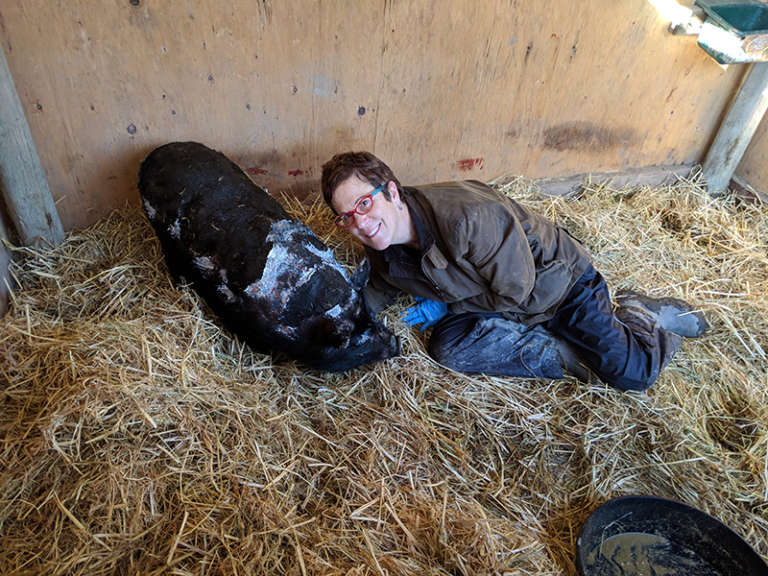 Fresno and Marybeth during a “fever strike” treatment 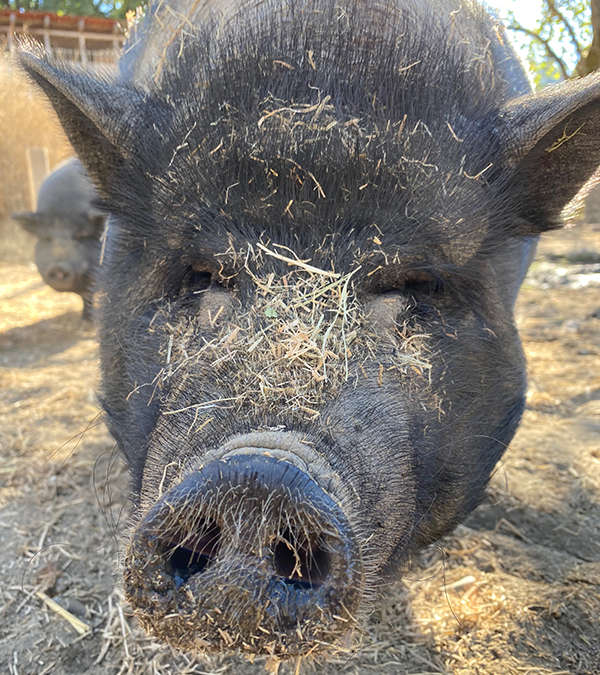 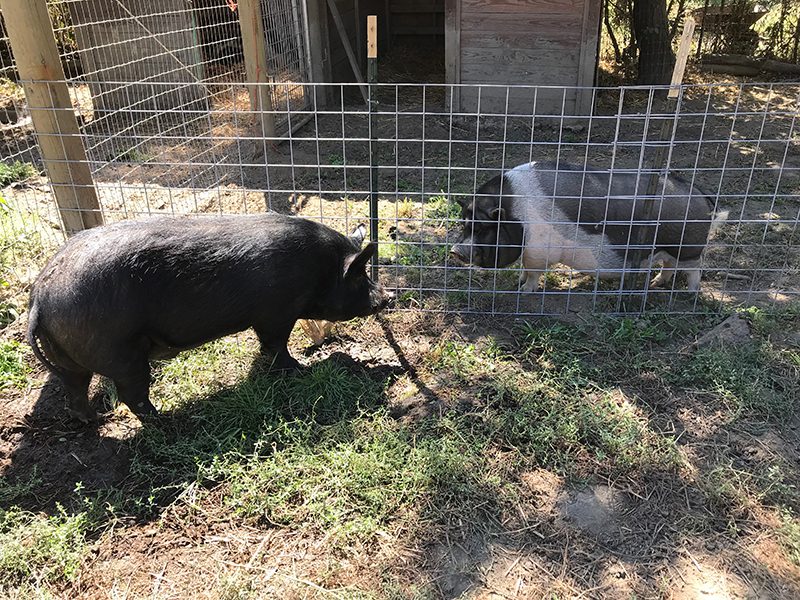 Tito was in really rough shape when he came to us. He was mostly blind, very malnourished, and had some neurological issues. He was removed from a horrible situation of mistreatment by a couple who couldn't stand to see him suffer. They estimated his age to be 4 or 5, and he was about half the size he should have been for that age. But – he was, and is, one of the most loving, trusting, and wonderful pigs we've ever met! Tito blossomed into a true gentleman within a few weeks of a good diet, medical care, and a LOT of love. The photo here shows him meeting his now pen-mate, Bubba. They are buddies!!

Bubba came to us from a family who had him for four years from a piglet. While he was a loving young man, he became aggressive to the family, who became concerned because of their small children. They called us, and we brought Bubba to When Pigs Fly Ranch. With patience and lots of love, he has become a wonderful, sweet pig in a very short time! He's trusting and loves back scratches. We're thankful to his family for trusting us with his care. 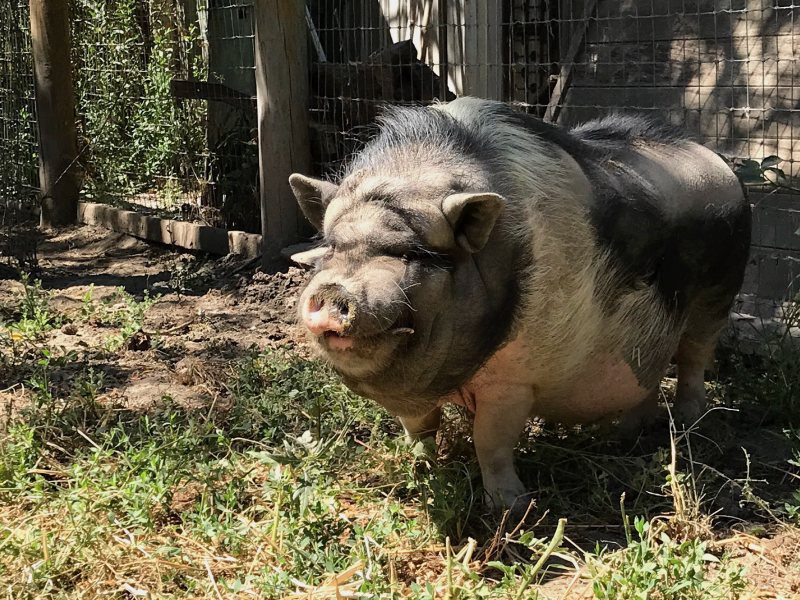 Wesley came to us from a family who had been raising pigs for meat. When they made the decision to stop, they had a 9-month old male and his father but could only keep one. When they found out about When Pigs Fly Ranch, they brought the 175-pound baby named Wesley to live out his life at the sanctuary with Piggy. Since he came to live with us, he has grown into a gentle giant. He currently weighs 789 pounds!! And is four years old. He's a big boy with a big heart. He loves to have his back scratched and will roll over for a belly rub instantly. He runs and plays like a puppy, knows his name, and comes running when he's called. He's our star pig for sure!! 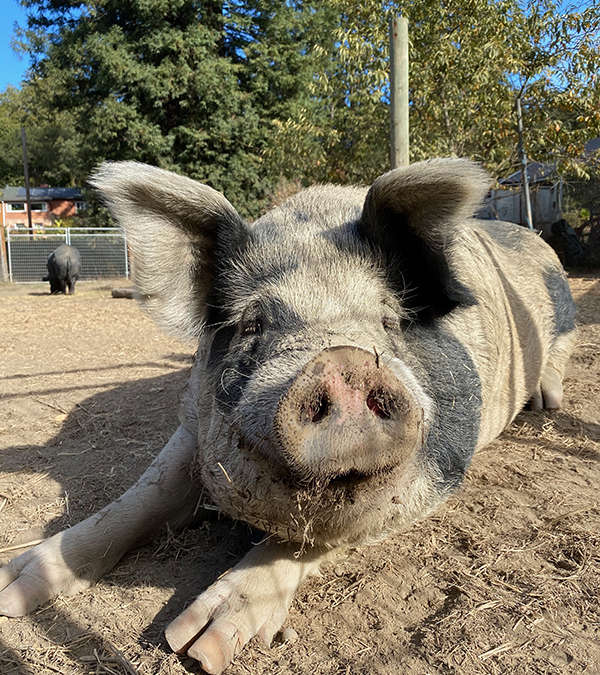 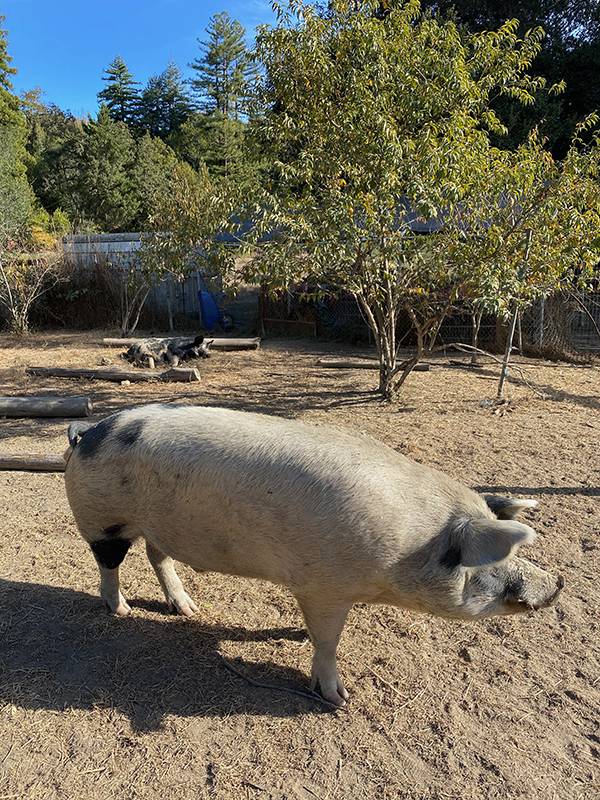 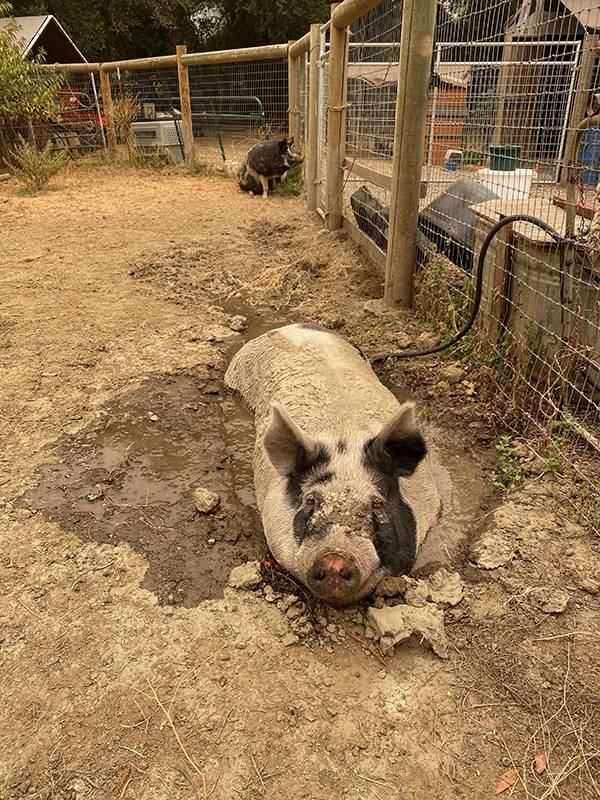 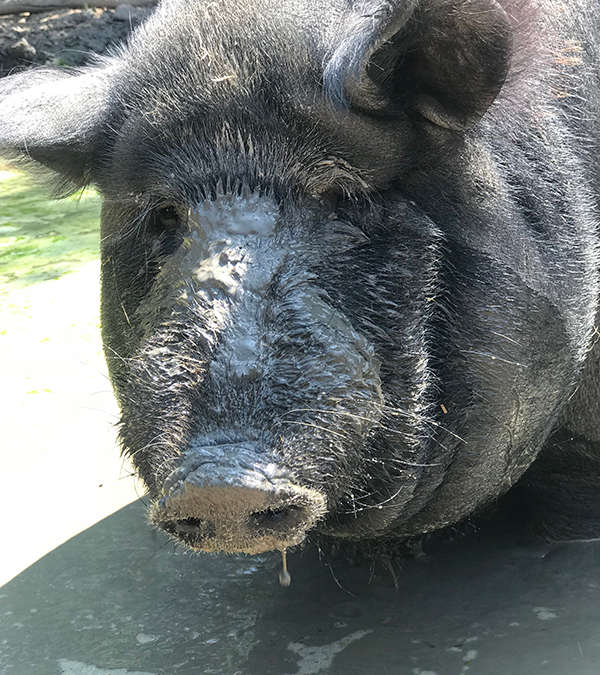 Oh, Monsieur Pierre! What a sweet, wonderful boy you are. Pierre was found as a wild piglet and raised by a very loving woman who loved and cared for him like a pet. When she found herself unable to keep him, she reached out to us, and we immediately took him in. Pierre LOVES to be scratched and have his belly rubbed. He thinks he's a big dog because he will run up to us and lean on our legs, waiting for scratching. His favorite food is pears, but he's also a fan of most fruits. C'est Bien!

When we rescued Fresno, we knew she was such a social girl that she would do best with a companion, so we researched pot bellies in need of rescue and found Hamilton through the California Pot Belly Pig Association. He was about 14 months when we got him, and he and Fresno became best friends instantly. And – they look alike! 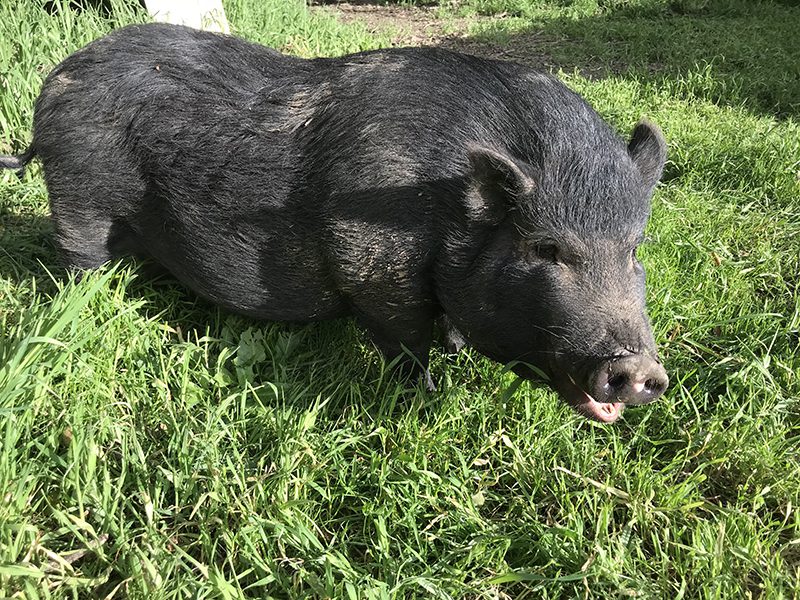 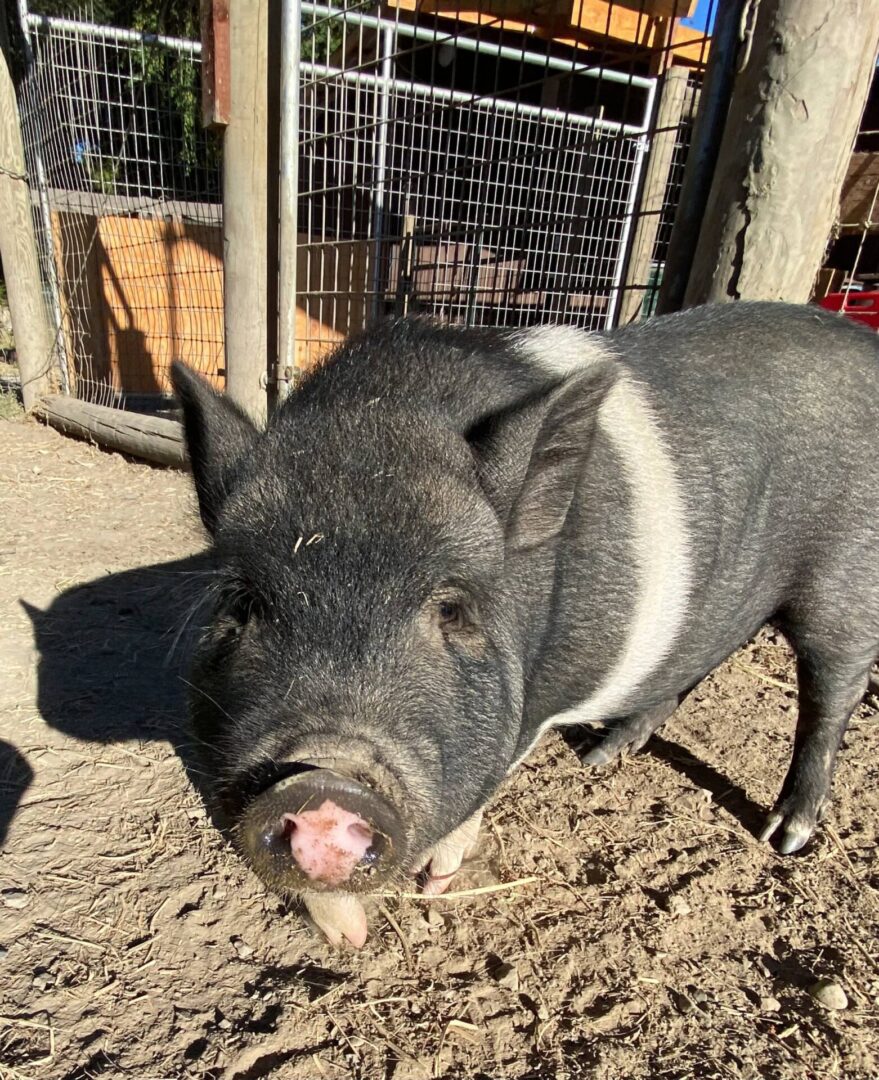 Pumba was found wandering near a farmer’s market in Oakland as a tiny piglet. He was picked up by a caring young woman who took him to her home in Oakland and raised him for about 4 months. When she had to move away for college she reached out to us to help. Pumba loves to be scratched and welcomes many belly rubs!

Sherman was being raised by a family in Southern CA who could no longer afford to keep him. We found out about him through another pig rescue - Pig Luv Co in Valley Springs, CA, and through a network of pig lovers, including us, of course, Sherman made the journey to Northern CA, and eventually to When Pigs Fly Ranch. Sherman is a smart, sweet little man with a big personality! 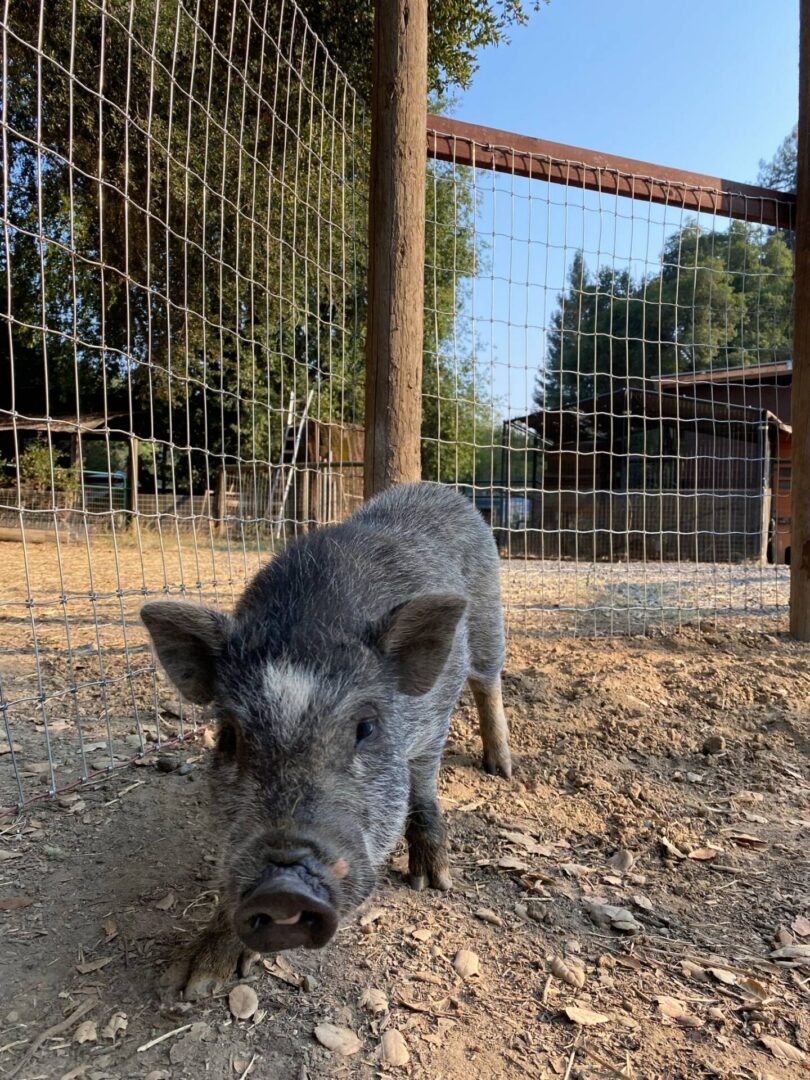 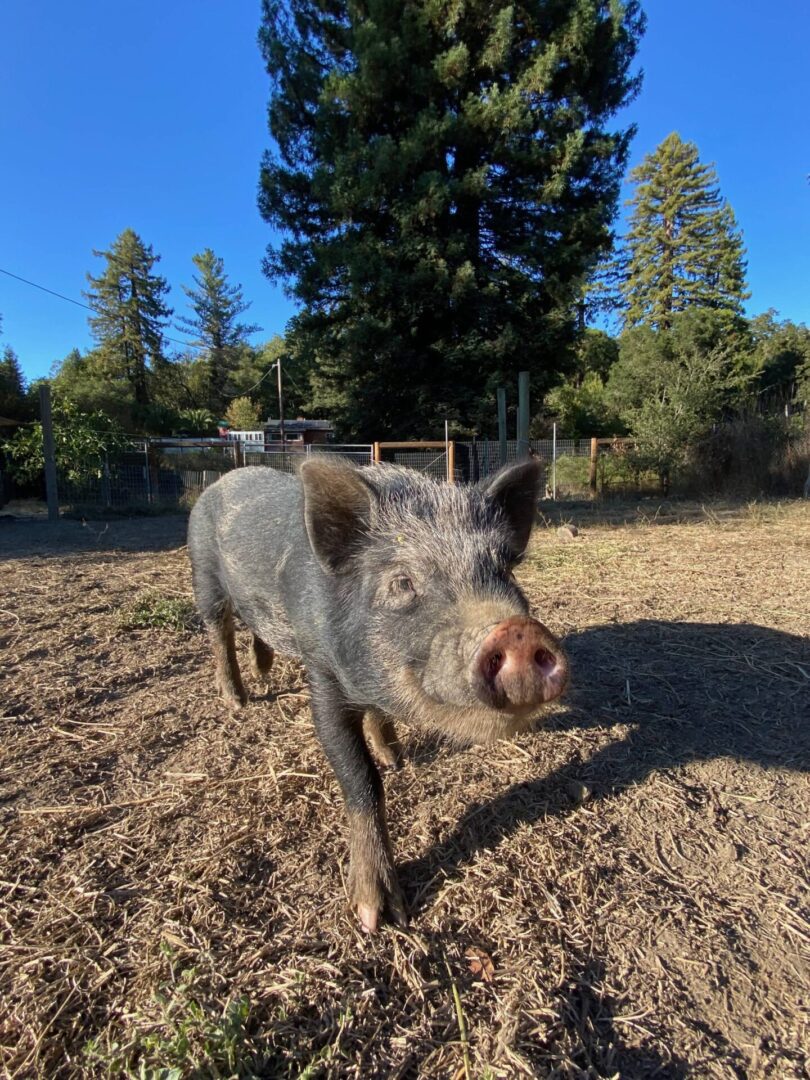 Hansel was found by neighbors roaming around Sonoma, CA, and was brought to our friends at Charlie’s Acres by concerned local police. They had recently rescued a pregnant pot belly, Gretel, also wandering in Sonoma, who gave birth to 8 piglets, so we offered to take in Hansel. He’s a very vocal, sweet and loving boy!

Here are just some of the chickens we took in when our neighbors at their bed and breakfast asked us to help out. Their flock was being decimated by raccoons, so we moved them all to our aviary/chicken shed, and they are a big, happy family! 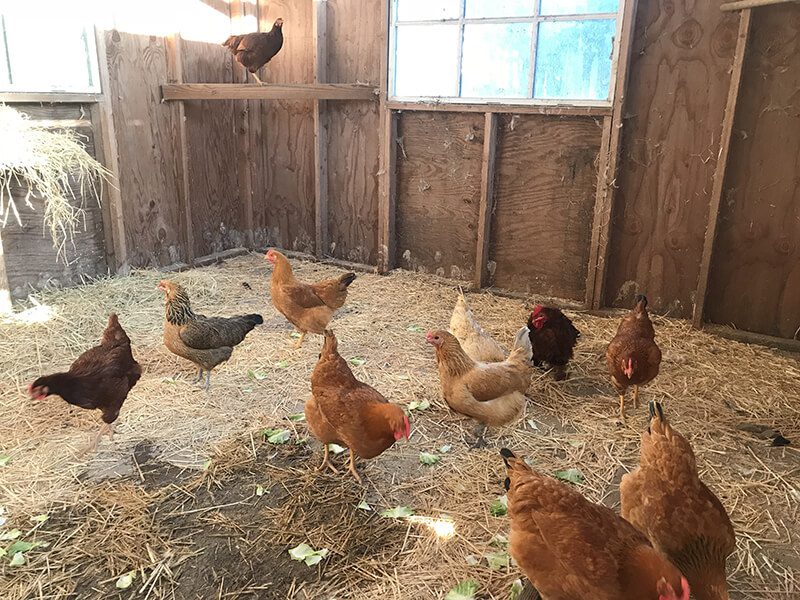